If you’d like to book me for a talk, please send an email to info@ilsr.org.

June 20, 2022 — Keynote on “Trustbusting Makes a Comeback” at the National Rural Grocery Summit.

A Few Past Events 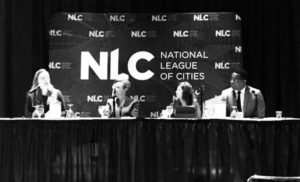 Jan. 30, 2020 — Panel on “Antitrust and the Democratic Primary” at Yale Law School, hosted by the Thurman Arnold Project and the Law and Political Economy Project.

Jan. 21, 2020 — Featured speaker at the Antitrust Symposium, organized by the American Booksellers Association in Washington, D.C.

Dec. 2, 2019 — Spoke on a panel about “Amazon’s Monopoly Power: Threats to a Fair Marketplace” at the Amazon Symposium, organized by UNI Global in Brussels, Belgium

Jan. 26, 2019 — Spoke on a panel about “Building a Strong, Diverse, and Resilient Local Business Community”  at the Winter Policy Meeting of the Mayors Innovation Project.

Nov. 13, 2018 — Spoke on a panel about “Crafting Effecting Rules for Internet Platforms” at an event hosted by the George Washington’s Institute for Public Policy and the Roosevelt Institute.

Oct. 11, 2018 — Spoke on a panel at “A Right to Compete: Are Monopolies Crushing Entrepreneurship?” conference in Washington, D.C., organized by the Open Markets Institute.

September 28, 2017— Gave the opening keynote talk at the Together, We Will Ensure Portland’s Independence conference, organized by the Portland Independent Business & Community Alliance. (Watch the video.)

August 12, 2017 — Session on the “Economic Impact of Concentration on Rural Communities and Main Streets” at the Food and Agriculture Conference, organized by the Organization for Competitive Markets.

January 25, 2016 —  Spoke on a plenary panel about “The New Localism,” at the American Booksellers Association’s annual conference. (Watch the video.) 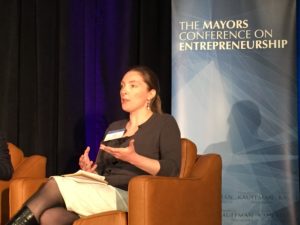 October 7, 2015 — Session on “If You Build It, Will They Come?” at the Kauffman Foundation’s Mayors Conference on Entrepreneurship.

June 17, 2015 — Speaker at an invitational symposium on “Antitrust and Entrepreneurship”  in Washington, D.C., organized by the American Antitrust Institute.

June 6, 2014 — Presented a session on “A Localist Agenda: Policy and Politics for Building a Community-Scaled Economy” with Barry Lynn of Open Markets, Aaron Bartley of PUSH Buﬀalo, and Lew Daly of Demos at CommonBound in Boston. (Watch the video.) 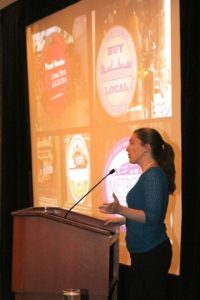 alk at the Summit for Advocates for Independent Retail, a Washington, D.C., meeting of leaders of national trade associations and other organizations representing independent businesses.

Oct. 17, 2009 —  Lecture in Bristol, U.K., at the Bristol Schumacher Conference, organized by the Schumacher Society and the New Economics Foundation.

May 7, 2008 — Keynote at the Third Annual Conference of Good Jobs First.